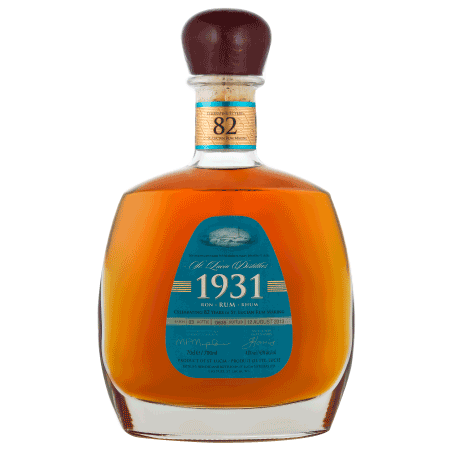 St Lucia Distillers, best known for their Chairman’s Reserve line, has in the past few years put forth a series of super-premium releases under the “1931” name. The year refers to the founding year of one of the distilleries that forms today’s St. Lucia Distillers. So far there are four editions, easily identified by a label color: tan, purple, turquoise, and black, respectively. The rums are a blend of pot and column stilled rums with an average age of approximately ten years.

1931 from St Lucia Distillers. This turquoise coloured offering is the 3rd edition in the series.

Originally released to commemorate 80 years of rum production by St Lucia Distillers this rum or to be more accurate these rums – as they are all entirely different blends have become something of a flagship rum for St Lucia Distillers.

This is a blend of rums from all of the distilleries four stills. The Vendome pot still, two John Dore pot stills and the the Continuous Coffery Still. The rums are aged between 6 and 12 years.

AGE: A blend of rums ranging from six to twelve years in age

Poured the rum is a classic amber colour.

The nose reveals the now familiar St Lucia pot still/Bourbon cask influence. It’s rich and deep. Very fruity with some sour mash like notes. A nice waft of oak and a hint of smoke. I has the distinct almost salty St Lucian twang, which is as distinctive as the Jamaican funk found in that islands Pot Still rums.

In the glass, the rum displays a dark chestnut hue. The aroma races ahead of the glass as you nose it, a wonderful symphony of pot-still smells. Oily, without veering into outboard motor territory. Linger a bit longer and you’ll pick up orange peel and clove. It explodes on your tongue, first with the heavier, oily notes that segue into a burst of sweet fruit. The finish is robust and long lasting with eucalyptus and suggestions of mint. The mouthfeel suggests a moderate amount of added sugar. A thoroughly enjoyable rum for sipping.

There are no reviews yet.

Only logged in customers who have purchased this product may leave a review.